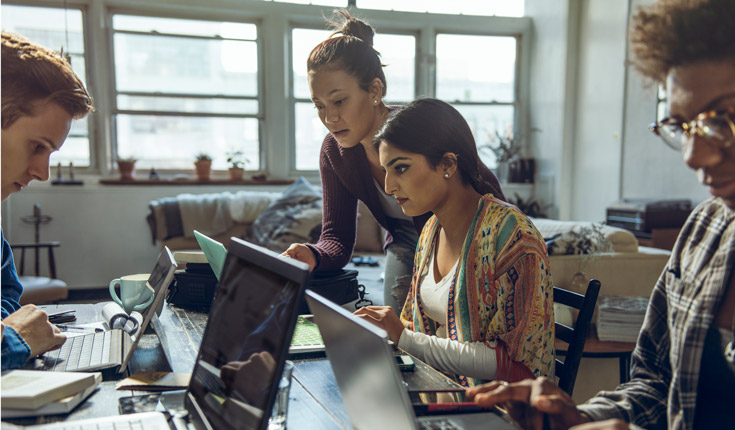 President Trump has temporarily suspended the issuing of new H-1B work visas for foreign workers seeking employment in the United States. It’s the latest in a string of anti-immigration policies intended to curtail the number of foreign workers in the US.

The executive order also bans the issuing of new L visas. The L-1 visa was a useful alternative to the H-1B Visa for foreign workers looking to work in the US. It allows migrants to be employed for a US company with global operations and return to work for the company in the States.

Officials have said that together with green card restrictions as many as 525,000 foreign workers could be kept out of the country until the end of 2020, when the current restriction ends.

Trump's executive order is essentially a ban on any new foreign hires under the H-1B visa scheme. It will likely put some prospective MBA candidates off studying in the US, out of concern for the lack of job opportunities post-graduation.

“It’s not only what the order does and doesn’t do, it’s the impression being left on prospective international students that the United States is harsh on immigration,” says Sangeet Chowfla, president and CEO of the Graduate Management Admission Council (GMAC).

Recent data collected by GMAC states that nearly one-third of prospective international students preferring to pursue graduate business education in the US cite 'social reaction to international students' as an area of concern, which is even higher than the ability to complete visa requirements (29%).

“While the order itself was a mix of good and bad, immigration rhetoric we’ve observed for some time in the United States is making it even tougher on American business schools to compete for global talent.”

Anti-immigration rhetoric in the US has already begun to take its toll on graduate management education. International applications to US business schools for the 2019-2020 academic year were down 13.7%.

A similar story could be seen in the 2020-2021 MBA application cycle. Piyush Ranjan, the founder and chief consultant of Management Masters Education Consultants—who provide services to applicants applying to the world’s top master’s in management and MBA programs—says that more and more international candidates are starting to look at European programs as an alternative to the US.

He believes top US schools—like the M7 or the Ivy Leagues—could notice a drop in international applications during Round 1 of the 2020-2021 MBA application cycle. This may be more significant for lower ranked US schools.

Whether this runs into Round 2 depends largely on the outcome of the 2020 US election. It would be expected a Democratic victory in that election would result in a reversal of the visa block in early 2021 and a return to rhetoric welcoming talented foreign workers. Though these may not be long-lasting changes, there has been an undeniable shift in the US market’s appeal to foreign students, driven largely by the uncertainty around post-MBA employment opportunities.

In the Graduate Management Admission Council’s (GMAC) most recent Application Trends Survey in 2019, among the non-US citizens who had considered business school the US in the past but did not now plan to apply, 50% said the ability to obtain a job in the US was a deciding factor—48% cited the ability to obtain a student visa, and 34% racism and discrimination concerns.

“The key point is that candidates are recognizing the unfavorable changes in the US market,” explains Ranjan, “and though it might seem temporary and MBA candidates are looking at a two-to-three year picture, the overall negative vibe from the administration is starting to affect application decisions.”

But it’s not the case everywhere. Bob Dammon, the dean of Carnegie Mellon’s Tepper School of Business, says that the school’s applications are up significantly, especially from international students.

He thinks that could be down to Tepper’s MBA being STEM-designated. Students graduating from STEM programs are able to apply for a 24-month extension to their Optional Practical Training (OPT), which allows them to stay and work in the US on a student visa. Students on non-STEM programs are still able to stay in the US on OPT for 12 months.

The order doesn’t place any restrictions on international students coming to the US to study, and it leaves OPT untouched, for now.

It could also be because the economy is currently struggling, and in times of downturn you typically see more professionals leaving the workforce to get their MBA.

Impact of H-1B visa suspension on MBA students and grads

The changes come amid the coronavirus pandemic hitting the US market hard. Trump claims the suspension on any new visas is to protect employment prospects for Americans amid economic uncertainty.

Changes to the H-1B visa in 2019 benefitted MBA and Master’s graduates, making them more likely than undergraduates to secure a visa. An MBA graduate’s chances of landing an H-1B visa increased by more than 10%.

Current H-1B employees who have already been issued a visa are allowed to stay, so MBA graduates with secured employment are unaffected. The impact will be felt by international MBAs who have perhaps not yet secured work in the US and are looking for H-1B visa sponsorship now or are still going through the registration process. Though these students are able to make use of OPT.

OPT remaining untouched is a positive note, explains Bill Boulding, the dean of Duke’s Fuqua School of Business. The OPT program offers “a critical path for badly needed STEM Talent that can keep the US economy competitive.”

The situation would be exacerbated if later in the year restrictions were extended to include students who remain as part of the OPT scheme.

Dammon believes that the real challenge now is for MBA students set to begin their degrees while there are travel restrictions on entering the US from abroad due to COVID-19. As of June 15th, any foreign national who in the last 14 days has been China, Iran, the European Schengen Area, the United Kingdom, Republic of Ireland, or Brazil, is unable to enter the US, according to the latest coronavirus travel restrictions.

Why the H-1B suspension is counterproductive

The restrictions send a message to international graduates that even if they come to study in the US, barriers are being put in place to make it difficult to stay and work after graduation. This is counterproductive.

“Research has shown that skilled immigration actually creates more jobs for the U.S. economy. On the flip side, research also shows if companies can’t recruit needed international talent to the US they will offshore those jobs—ultimately hurting American workers by providing less opportunity in the US economy.”

International talent has helped build America into the business hub it is today. New American Economy—a research organization that documents the impact of immigrants on the US economy—found last year that almost 45% of Fortune 500 companies were founded by immigrants or their children.

Dean Raghu Sundaram of NYU Stern School of Business, says that the restraints on immigrant workers will “restrict innovation, economic recovery, and the potential for economic growth.”

"We are deeply disappointed by the restrictions placed on high-skilled immigrants coming to the United States,” he adds, “and by the zero-sum presupposition behind this move.”

Many international candidates may be waiting to see the election results in November before fully committing to an MBA in the US—it would be no surprise to see another significant drop in international applications to US business schools if nothing changes. Though this is uncertain as the restrictions could be reversed further down the line.

Either way, by denying international talent the chance to stay for the sake of homegrown economic recovery, America is missing out on the foreign talent and innovation that helped build its economy in the first place.