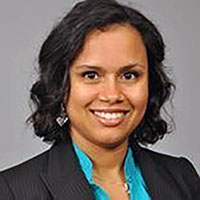 Gisselina’s MBA story was not one that was easy to pursue, but it afforded her the opportunity to enter the financial services industry while growing her family. Originally interested in engineering, Gisselina had no clue nor the networks to understand where to begin her journey, but by networking prior to business school, she leaned on friends and other resources to guide her to completing the GMAT and eventually getting an MBA. Today, Gisselina is a mid-career level professional at the Federal Reserve Bank of New York. She is also a proud mom dedicating her time to caring for her children. What seemed like an impossible breakthrough into an already competitive industry, Gisselina powered through and achieved her dreams with her MBA. This is the face of a proud Duke Fuqua MBA.

Let’s go through the beginning… Tell me a little bit about how you figured out where to start for grad school? What place were you in your life?

I was working as a test engineer for Northrop Grumman and had in my mind that I wanted to go to business school at some point in my life. This idea came to me during a Society of Hispanic Professional Engineers (SHPE) conference a few years back when I attended a panel. One of the speakers had attended Kellogg and made an impression on me and that ignited my interest in pursuing an MBA. But... in my environment, nobody did that. I didn't really know of any other engineers who went to b-school and I really had no clue how to go about it. So I reached out to one of my sorority sisters (SLU) and a friend from a fraternity (LUL) who had. My friend (Ramon Marmolejos) had been an MLT fellow and was attending b-school in Spain (IE) and he recommended I apply to MLT, which I eventually did and it was a great experience. I still keep in touch with many of my MLT fellows and a few from my cohort are all working at the NY Fed with me.

I’d love to hear a little more about any extracurricular activities you pursued. Did you join any organizations or programs prior to b-school, in b-school, or beyond? If so, how did they help in your school or career pursuits?

In undergrad and while I was an engineer, I was heavily involved in SHPE. I recruited for my company at SHPE conferences for some time too. SHPE is where I first got the idea to go to business school. During b-school I was involved in the Latin American Student Association (LASA), the National Society of Hispanic MBAs (NSHMBA), and General Management Association. I, unfortunately, have not been as involved since then, as I now have two young children on my own and don’t have the time for much else, but those were great affiliations for me and the early development of my finance career.

Originally, I intended to go back to engineering, but in a management role. However, I decided to switch careers and go into finance, which was a tough challenge, as competition for jobs was fierce and I was coming in late in the game, but I played catch up and eventually succeeded.

Talk to me a bit about your experience as a Latina pursuing an MBA… Can you describe your application and grad school experience in detail from that viewpoint?

Honestly, I didn’t feel any difficulties as a Latina. The whole application process was great for me because I was a part of MLT that gave me the support I needed with a coach and fellow members so I really felt I was set up for success.

How have you mentored people of color during your career and would you encourage them to pursue an MBA?

I continue to remain a resource to anyone who reaches out to me about business school. I have also recommended MLT, and had conversations with a few people interested. I bring it close to home where I have also told my former babysitter what she needed to do to get into business school, including recommending MLT. She just recently moved to the US from Dominican Republic and is attending Baruch and studying accounting. Beyond her, I often encourage others to go for an MBA, but also remember that it may not be the right choice or only path for everyone. Personally, it was one of the best decisions I ever made!

I think, yes! Generally, there is low minority representation, but also, the notion that "there's nobody like me" never really discouraged me. In fact, the opposite was the case. I wanted to prove to the naysayers that not only could I do it, but I could do it really well! I was an engineer, and often, I was the only woman and the only Latina so from my perspective, business school was only becoming more diverse with me in the room! But the reality is that getting into a top b-school is tricky when you don't have the support, connections, or understand the process. I don't think I would have made it through without MLT.

Is there any advice you would give to other underrepresented minorities that are thinking about going to grad school and/or progressing further in their career?

Apply to MLT and get involved with minority organizations. They will become your family, your support, your cheerleaders!

Great! So I have a few questions in hindsight… What was the most important decision you’ve made in your career thus far?

Getting an MBA at Fuqua!

I would have traveled even more during business school. I did quite a lot, but I’ve always wanted to do a 6-month or longer exchange. I was too worried about getting a job so I’m not sure if that would have been possible really, but I did do a 3-month exchange. Other than that, nothing at all. I loved my time at Fuqua! ❤️

To closeout, I want you to channel your inner DJ Khaled… If you could offer a “major key” to success (specifically to people of color interested in a career in business), what would it be? [Feel free to offer more than one]

Yes! A major key for success is make sure that you give equal focus to education as you do to building connections in business school. If possible, give a little more to building those relationships because your classmates will become your friends for life!
Also, find a program that's supportive and team-oriented. This was my biggest draw to Duke. TEAM FUQUA! We all get further if we are supporting each other through the struggles!

Learn about other impressive MBA's of Impact spotlights below.